In typical fashion of Spiritual Babylon and Sodom, the US Government is pushing it’s way into the realms of prophecy and judgement.  We should have known when Bruce Jenner was on every magazine, and television headline with the wicked promotion of his “interview special” declaring himself as a woman that something was around the corner waiting to reveal itself.  America has now accelerated the judgement of the Most High by legalizing same-sex marriages in all 50 States.

After Obama flipped flopped on the issue a number of times. One of his former political strategists David Axlerod admitted that Obama lied about his opposing gay marriage in his 2008 campaign for political advantage.  According to his book Believer: My forty years in politics, Axelrod writes that he knew Obama was in favor of same-sex marriages during the first presidential campaign, even as Obama publicly said he only supported civil unions, not full marriages. Axelrod also admits to counseling Obama to conceal that position for political reasons. “Opposition to gay marriage was particularly strong in the black church, and as he ran for higher office, he grudgingly accepted the counsel of more pragmatic folks like me, and modified his position to support civil unions rather than marriage, which he would term a ‘sacred union,’ ” Axelrod writes.

Proverbs 29:12  If a ruler hearken to lies, all his servants are wicked.

With this scripture being the case, what kind of Government and political structure do you think is running America?

As a state senate candidate in 1996, Obama filled out a questionnaire saying “I favor legalizing same-sex marriages, and would fight efforts to prohibit such marriages.” But 12 years later as a candidate for president, Obama told Rick Warren’s Saddleback Church that marriage could only extend to heterosexual couples. “I believe that marriage is the union between a man and a woman,” Obama said at the time. “Now, for me as a Christian — for me — for me as a Christian, it is also a sacred union. God’s in the mix.” 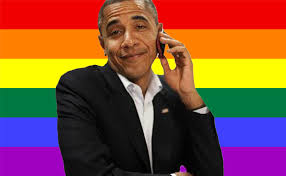 Riding on the coat tails of the civil rights movement, and moral injustices that the Children of Israel fought for and suffered, the LGBT community has now slid in on a false narrative of oppression and obstruction of dignity.  Prepare for the flames Israel!

Leviticus 20:13  If a man also lie with mankind, as he lieth with a woman, both of them have committed an abomination: they shall surely be put to death; their blood shall be upon them.

Romans 1:25-27 Who changed the truth of God into a lie, and worshipped and served the creature more than the Creator, who is blessed for ever. Amen.
[26] For this cause God gave them up unto vile affections: for even their women did change the natural use into that which is against nature:
[27] And likewise also the men, leaving the natural use of the woman, burned in their lust one toward another; men with men working that which is unseemly, and receiving in themselves that recompence of their error which was meet.