A Chef’s Guide for Oil

Nothing is too good when it comes to feeding your family! You’ll run all over town for the ripest tomatoes, the most flavorful whole-grain pasta, the freshest baby greens. But using poor quality cooking oil to prepare these top shelf ingredients is like buying a Maserati and putting lowgrade gas in it. You wont get all of the performance you paid for.   In the recent years I have seen a spate of cooking oils appear on market shelves.  It is no longer just a choice between olive oil and extra virgin olive oil. Besides taste and composition (monounsaturated verses polyunsaturated fats, for example), an important variable between cooking oils is smoke point.  This is the temperature at which oil starts to smoke. This is the point at which oils oxidizes , causing harmful free radicals and toxic fumes. In general, oils that are more refine, or processed, tend to have higher smoke points, the higher the smoke point, te hotter the cooking temperature it can stand.

It also helps to know that you should add food to the pan. When the oil is heating up , there’s a point right before it smokes where it gets active in the pan and kind of shimmers. That’s when you want to add the food. With those points in mind, here is a selection of popular cooking oils.

Canola oil is an all-purpose oil with a high smoke point. Excellent for baking, cooking, sautéing or frying. It even have little to no flavor so it doesn’t take over a dish. Canola oils named after Canada where it was originally developed, comes from the rapeseed, refined to remove bitterness. It’s rich in monosaturated fat, the healthy kind that can reduce cholesterol levels, and low in saturated fat. It also has a good balance of omega-6 and 3 essential fatty acids crucial for everything from brain function to blood clotting, and that have also been shown to reduce cardiac risk! Sounds like the perfect oil right? It used mostly because its affordable, but 90% of canola oil is highly processed and made from genetically modified (GMO) rapeseed. To avoid this, buy certified organic canola oil.

The KING of heart healthy Mediterranean cooking, olive oil supplies monosaturated fats and it low in saturated fat, and has anti-inflammatory properties studies have shown that diets rich in olive oil can contribute to a decline in cardiovascular disorders, including hupertention and strokes, thanks to its cholesterol lowering capacity. It also has a good balance of omega-6 and 3 and is rich in vitamins E and K.

Olive oil has a low smoke point, so it’s really not good to use to cook with. It delicate and destroyed easily under heat, so I aways recommend using it to finish off a dish or in dressings because the texture is silky and tastes is fresh and grassy with a slight peppery finish. But the flavor depends on what region the oil comes from and how it’s pressed. For a long time we have heard that saturated fats are not good, and it so happens that coconut contains 92% saturated fat. Coconut oil is a plant-based fat with no unhealthy cholesterol. Meaning it occurs naturally as opposed to those man-made hydrogenated saturated fat found in most processed food. It’s a nutrient rich healthy fat with so many other benefits!

Coconut oil is also rich in lauric acid, a fatty acid believed to have antimicrobial properties and to boost the immune system. Also rich polyphenols, antioxidant substances that have been shown to prevent such degenerative ailments as cardiovascular disease and cancer. Wait not don’t! In addition to its health benefits coconut oil has a medium-high smoke point. You can pretty much cook anything with it! Pressed from the flesh of the avocados, is also good in the monosaturdated fats which lowers LDL’s and raise good cholesterol. Studies have also shown that it lowers the risk of some cancers. Avocado is great for frying because it has a high smoke point. The only thing is…..it’s expensive. Hummmm exotic…… This oil is sweet with a topical and buttery flavor that make it more of a treat that a go-to snack of nuts.  You simply would not want to share, besides the fact that it too is expensive but oh so worth it! Macadamia nut oil can be used just as olive oil is used, but except it has a higher smoke point. It can be baked and sautéed with. As far as nutrition goes it the highest in monosaturated fats among cooking oils, along with high levels of omega-3s. It even reduces inflammation and protects against heart disease. 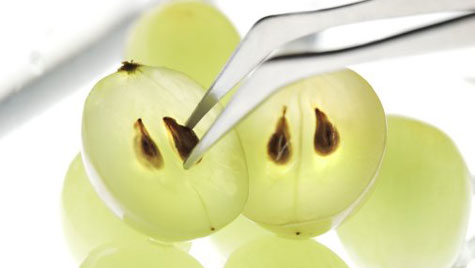 Yes, the little teeny tiny seeds of grape contain oil! With the technology of today oil can be pressed from the seeds leftover from the winemaking process! Unlike the mentioned oils, grape seed oil has a low level of monosaturated fat (17% compared to 84% in macadamia nut oil) and a very high level of polyunsaturated. It too helps decrease bad cholesterol, benefiting cardiovascular health.  Also high in omega-6 which causes inflammation if not balanced out with omega-3. Grape seed oil has a high smoke point and cann be use for frying and backing.

Deep-fried food is on the no-no list when it comes to healthy eating, but why not make it every once in a while as a treat! If so, peanut oil would be a great option to use! Made from steam-cooked pressed peanuts or technically a legume, it has a balance amount of monosaturate and polysaturate fats. Which means it has a good balance of omega-3s and omega-6s. It even has light flavor and wont over power the food cooked in it. Lastly, since peanut oil is refined and processed under high heat, which removes the peanut protein, it than can be tolerated by those that are allergic. But of course, check with your doctor first. Sesame oil has a low smoke point but add a good flavor to foods. There are two types of sesame oil. One is made from pressed untoasted sesame seed which has a milder nutty taste. The second oil is made from toasted sesame seeds making it to have a bolder flavor! Has a good balance of poly and mono fats while low in saturated fat. It also a good source of vitamin E and other antioxidants.